‘An octology according to Virgil Abloh.’
Collection 8: In the grand scheme of things. Paris, January 2022.

‘An octology according to Virgil Abloh.’ Collection 8: In the grand scheme of things. Paris, January 2022. 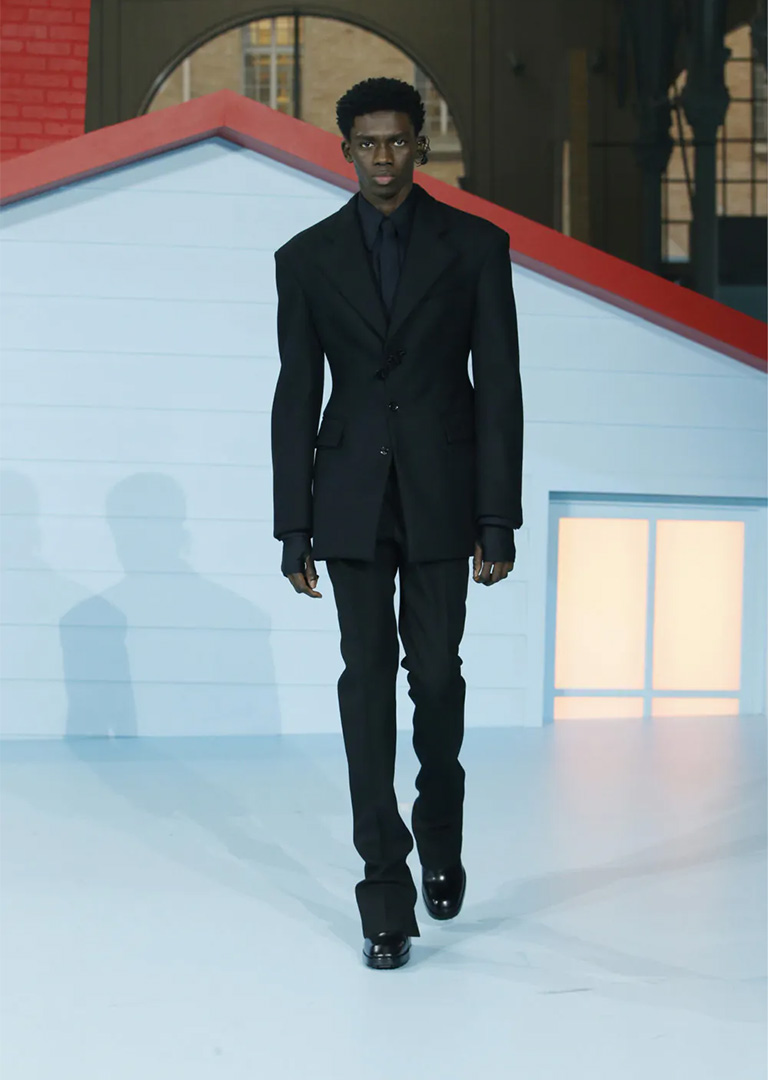 Imagination: the human faculty of forming new ideas not already present to the senses.

Definition and redefinition are key to understanding the work of Virgil Abloh at Louis Vuitton. Supported by his seasonal Vocabulary – “a liberal definition of terms and explanation of ideas” – his eight-collection arc is founded in the desire to change our ways of seeing. Using fashion as a tool, his premise lies in decoding the biases associated with the components of human appearance. He wants to recode the way we treat each other according to how we look and present ourselves. One of Virgil Abloh’s most used terms, imagination is what fuels this dream. It’s what drove him to Louis Vuitton and what defines his legacy at the Maison.

Executed in eight parts between 2018 and 2022, the work of the Men’s Artistic Director is never content with simply imagining new clothes and accessories. He seeks to evolve the human val - ues with which we imbue our dress codes, and test how they – as social, political and cultural signifiers – can be used to im - plement change beyond fashion. Driven by that imagination, the 𝓛𝓸𝓾𝓲𝓼 Dreamhouse™ conceived by Virgil Abloh for Fall-Winter 2022 (Collection 8) serves to condate the themes and messages of the arc he created at Louis Vuitton. It’s an octology that plays out in the tradition of the Hero’s Journey: the age-old story of the underdog, who is tried and tested, and becomes a sensation in the eyes of his spectators.

The coming-of-age story unites the designer with his audience, and allows future generations to mirror themselves in his experience. At its root is his Boyhood Ideology®, the childlike sensibility observed throughout his oeuvre. Virgil Abloh defines the Boyhood Ideology® as the unspoiled outlook of a child, who is yet to be affected by the preconceived ideas of society. He wants to reset our preordained perceptions and start from scratch where clothes are clothes and humans are humans. To cement this methodology, he frames his shows in childlike whimsy: the 𝓛𝓸𝓾𝓲𝓼 Dreamhouse™ of Collection 8, the bouncy castle and build-your-own-kite kit of Collection 3, or the rainbow runway of Collection 1 where it all begins.

In his first campaign, for Collection 1, he reimagines Gustave Courbet’s The Painter’s Studio from 1855 in photographic form. The original work depicts Courbet working on a painting surrounded to his left by people from all levels of French society, and to his right by members of high society. Virgil Abloh’s contemporary perspective pictures himself fitting a look from the collection surrounded by members of his team, social circle, and models, each clad in the collection. Where Courbet’s painting interprets ‘real world’ society for the eyes of the cultural elite, Virgil Abloh portrays the all-encompassing exchange that defines his vision for Louis Vuitton: diversity, inclusivity, and unity. He revisits the painting for Collection 8, adapting the original into tapestries and prints.

After The Wizard of Oz, it had to be The Wiz. Inspired by the Oz adaptation that featured an all-Black cast, Collection 2 establishes the Black Imagination that will underpin Virgil Abloh’s every move at Louis Vuitton. Black Imagination denotes the rethinking and overturning of inherited and often unconscious expectations tied to Black identities through history. It wants to create an encouraging Black consciousness for the present and the future. Merging this premise with his Boyhood Ideology®, Virgil Abloh creates a colourful crew of puppets for Collection 5 based on his memories of his friends when they descended on Paris for his first Louis Vuitton show.

The puppets look like toys, but they are inspired by the West African wooden sculptures he grew up with as the son of Ghanaian immigrants. Throughout Collections 5, 6 and 7, his work begins to express a more personal nature. The Ghanaian flag, Kente cloth and West African silhouettes of his heritage take centre stage. He bases his film for Collection 6 on James Baldwin’s Stranger in the Village, examining the experience of being a Black artist in the birthplace of European art. He devotes Collection 7 to the Amen Break, a little-known drum break of a B-side created by the funk-soul group The Winstons in 1969, which would be sampled and go on to underpin the hip-hop and jungle genres, and splinter into thousands of the pop tracks most familiar to us today.

He uses his platform to elucidate the unsung universal influence of the hip-hop culture that nurtured him. He wants to contribute to a Black Canon: an abstract catalogue for the memory, reconstruction and preservation of the history of Black art on par with the way in European art is studied and taught. To Virgil Abloh, documenting his prolific output is always about posterity: preserving it so it might inspire future generations, and open the door he has kept ajar for the opportunities of others. With this in mind, time is of the essence. His work often deals with themes of time: the lifespan we are given to make a difference on this Earth.

The invitation for Collection 4 features a clock that goes backwards. In the middle of the surrealist cloud-adorned show set stands a tree fitted with a ladder that reaches into Heaven. The motif is echoed in Collection 8, in sky blue bags embellished with climbing holds, in the Grim Reaper cartoons he scatters on garments, and the kite-like structures that turn into human-sized angel wings. Like his beloved cityscapes by Giorgio de Chirico, Virgil Abloh imagines a life where we can slow down the clock, turn back time, or even make it come to a stop.

To Virgil Abloh, limitations are manmade. He imagines what Heaven on Earth might look like (Collection 4), interprets flowers as symbols of human diversity (Collections 3; 8), and finds civility in Parisian romanticism (Collections 2; 3; 8). He is passionate about surrealism, but his work is never as passive as escapism. At the core of his ethos is a genuine desire to confront the issues of the world, and he approaches that dream with fervent pragmatism. When rational solutions don’t seem to make the world a better place, he gives the opposite a shot.

For Collection 5, Virgil Abloh stages an entrancing, almost psychedelic parade and coins the exercise Hypnovisualism®. A decidedly irrational way of inspiring compassion in people through hallucinogenic displays of wonder, it is closely linked to his concept of the Trojan Horse for the Mind™. It is his way of sugar-coating social and political issues in pleasant layers of what he calls “nuance” – theatrics, amusement, poetry – and delivering his weightiest messages with a smile. Virgil Abloh sees that clothes can be used as tools for change, and decides to use every inch of his global platform to create something far beyond the realm of “fashion”.

Since 1854, Louis Vuitton has brought unique designs to the world, combining innovation with style, always aiming for the finest quality and preserving biodiversity. Today, the House remains faithful to the spirit of its founder, Louis Vuitton, who invented a genuine “Art of Travel” through luggage, bags and accessories which were as creative as they were elegant and practical. Since then, audacity has shaped the story of Louis Vuitton. Faithful to its heritage, Louis Vuitton has opened its doors to architects, artists and designers across the years, all the while developing disciplines such as ready-to-wear, shoes, accessories, watches, jewellery, and fragrance. These carefully created products are testament to Louis Vuitton’s commitment to fine craftsmanship.

Choose your size and add to favourites